Director of Urogynecology at the Center for Female Pelvic Health, 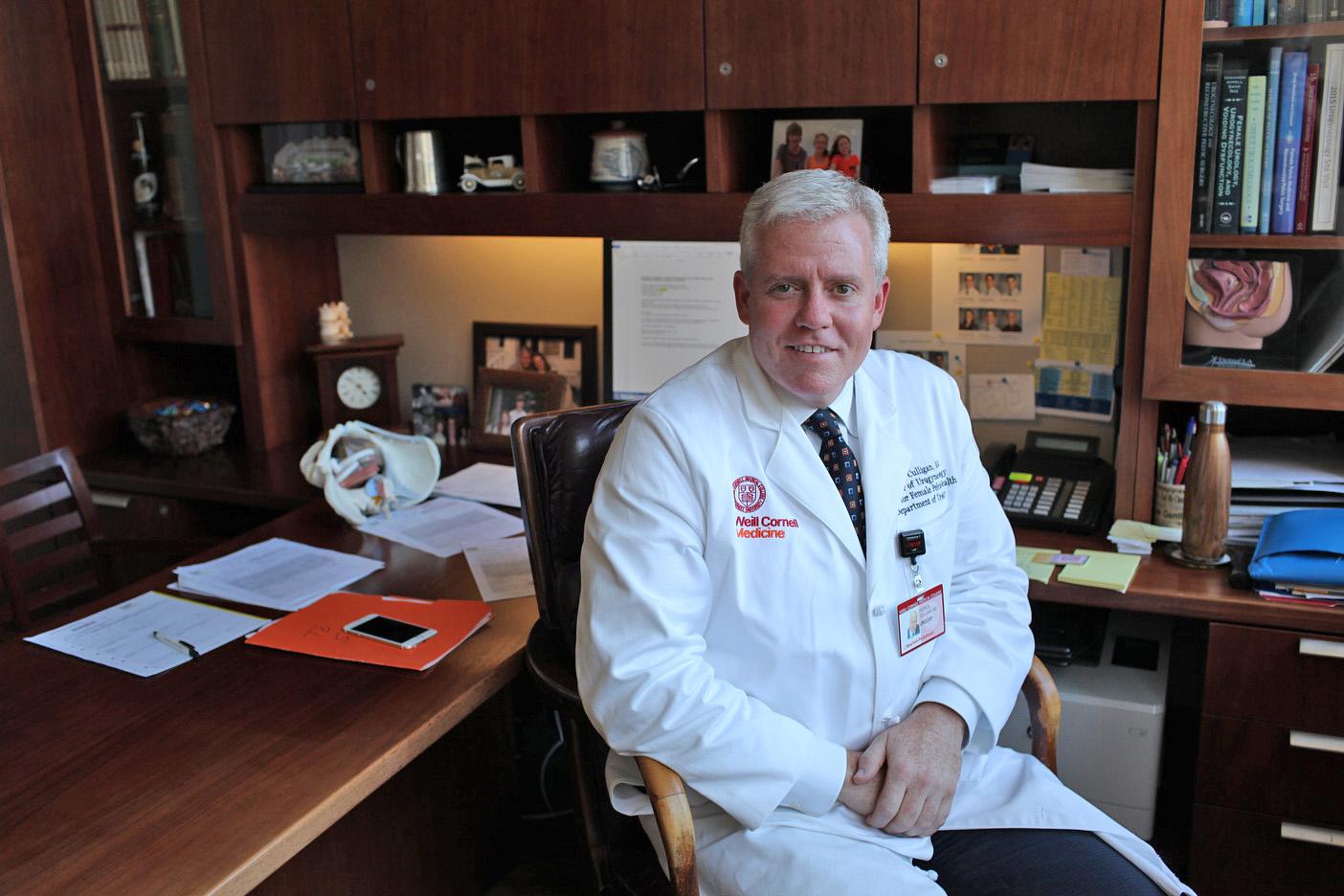 "Urogynecology is an extraordinary medical field, as we get to help women who would otherwise suffer from conditions that can essentially ruin their quality of life," says Patrick J. Culligan, MD, Director of Urogynecology at the recently established Center for Female Pelvic Health in the Department of Urology at NewYork-Presbyterian/Weill Cornell Medical Center. A nationally recognized leader in urogynecology and advanced minimally invasive reconstructive surgeries, Dr. Culligan provides care for women who have suffered for years – and often silently – with discomforting pelvic conditions, including pelvic organ prolapse. "Astonishingly, women typically live with organ prolapse for five or 10 years before seeing a physician," says Dr. Culligan, who previously served as Director of the Division of Urogynecology and Reconstructive Pelvic Surgery for the Atlantic Health System. "This field exists to focus on the surgical and nonsurgical therapies that actually work for them."

At Atlantic Health, Dr. Culligan created a board-approved fellowship program and published over 50 peer-reviewed articles on clinical research focused on ways to improve and teach minimally invasive surgical techniques for the correction of prolapse and incontinence. While there he also developed particular expertise in robotic-assisted laparoscopic surgery and has become a world-renowned teacher of those techniques. "Our philosophy at Weill Cornell's Center for Female Pelvic Health is to understand each patient's personal goals and what is interfering in their quality of life. We then develop a nonsurgical and a surgical plan and let the patient decide. That's a key point," says Dr. Culligan. "Many women start out nonsurgically and then ultimately choose surgery, and some are satisfied with their nonsurgical plan." Vaginal surgery, notes Dr. Culligan, is the classic minimally invasive surgery, utilizing no abdominal incisions. "We perform vaginal hysterectomy and vaginal reconstruction; it's the original, natural orifice surgery." With vaginal surgery, the patient's own native tissue is typically used in the reconstruction. "The problem with native tissue surgery is that the surgery is only as good as the patient's tissue," says Dr. Culligan. "The failure rate with vaginal surgery is going to be high – about 30 percent. The other part of that story is that women often live with their pelvic organ prolapse for years before they do anything about it. When you do a surgery after all of that and then it fails within a year or two, it's very discouraging for the patient."

The Success of Robotic Sacrocolpopexy

Sacrocolpopexy for repairing pelvic organ prolapse has been performed since 1962 and for years this procedure of "last resort" was an open surgery. Dr. Culligan became one of the first urogynecologists in the country to regularly perform laparoscopic sacrocolpopexy; he then transitioned to robotic sacrocolpopexy. During this time, the evolution of mesh material for the procedure had improved. "We use polypropylene mesh that is very lightweight," says Dr. Culligan. "It's strong enough to hold the tissue in place and allow the patient's own tissue to grow into the graft itself and create the strength that is necessary without the mesh complications." Dr. Culligan has developed a technique for placing the mesh along the entire length of the anterior and posterior vaginal walls. "This is so I can reconstruct the vagina and basically re-conform it to a natural and normal size and shape after prolapse and not have to do anything vaginally," he says. Dr. Culligan also specializes in mesh removal. "Patients come from all over to have their mesh removed when necessary," he says. "It's a challenging surgery, but it is also very gratifying. It can be a quick fix for people who have been in a lot of pain from the mesh. Oddly enough, when it is taken out, the healing process keeps everything where it belongs and we don't have to replace it." Dr. Culligan has done extensive research on robotic sacrocolpopexy. With long-term patient follow-up greater than five years, he has an extremely good, long-term success rate, both objectively and subjectively. "It's having a hybrid end point," says Dr. Culligan. "We're not just looking at an objective, anatomic outcome, but also subjective – do the patients feel they have met their goals and are they happy with the results." Many surgeons perform part of the surgery robotically and then perform additional surgery vaginally, says Dr. Culligan. "This turns into a long ordeal. The techniques that I've developed, and have trained others in, are to accomplish everything with the robot." To that end, Dr. Culligan published the first robotic simulator protocol as a way to provide board-certified laparoscopic surgeons with robotic surgical skills without learning on live patients. After taking the course, the surgeons were able to perform a robotic hysterectomy at expert levels. "There was no significant difference between the experts doing benchmark hysterectomies versus the novice's doing their very first robotic hysterectomy," says Dr. Culligan, who is presently exploring if the protocol can be applied to resident training. "That's predictive validity, which is the Holy Grail of validity studies. A number of health systems around the country have since adopted this protocol."

Prolapse Surgery Failure: A Genetic Cause?

Dr. Culligan's research pursuits include investigating a genetic mutation that may cause prolapse surgery failure. For more than 10 years studying a large number of patient cases, Dr. Culligan noticed a handful of patients whose surgery failed early on and in an unusual clinical way. "That made me think that it wasn't the surgical technique or that the sutures were faulty. Ultimately, I asked these patients to be in a research study and provide me with their full genetic information." Dr. Culligan compared a random selection of successful cases from his database and asked those patients for their genetic information as well. "It was, essentially, a fishing expedition looking for a genetic mutation that would make sense – something that could explain the failures. We found a mutation on a gene on chromosome 5 that existed among the patients that I selected as unusual clinical failures and that was not present in any of the controls. We then compared two very large databases of patients with similar demographics. This has been the first step. The next step is verification, which will be a longer process, but it could be very exciting." Recently the Center for Female Pelvic Health welcomed urogynecologist Tanaka J. Dune, MD. " Dr. Dune is excellently trained, and in this field that is devoted to women, it's great to have a female perspective," says Dr. Culligan. The Center continues to grow and has incorporated physical therapists. In addition, Dr. Culligan and his Weill Cornell colleagues are in the process of are establishing a board-certified three-year fellowship in female pelvic medicine and reconstructive surgery in collaboration with colorectal specialists, gastroenterologists, and urologists.

Culligan P. Genetic mutation that may contribute to failure of prolapse surgery in white women: A case-control study. Journal of Minimally Invasive